Well… it’s been a while, hasn’t it? Thankfully, sheer laziness has been only a secondary cause for my lack of blogging; the primary reason is that I’ve been to busy actually playing games. And procrastinating. But, spurred on by a (necessary) resurgence of my other blog, I’ve decided that the words need to flow on this one, too. Too much of a blockage can get uncomfortable, y’know?

When I last posted something on this blog, I was battling with Ikaruga – in attempting to get an A-Rank on the first (and, by far, the easiest) level, the best I could manage was a B++… 1.86 million points, and little idea of how I could realistically up my game to get that extra little points bump. After watching a pile of replay videos (a wonderful feature of the XBLA port), I realised that I was missing out on some serious use of the energy absorption / release mechanism: not only was the homing super-weapon useful for chain maintenance, but absorbing bullets actually scores points.

I switched from Easy mode to Normal mode, with the result that slain enemies dispatch little clusters of same-polarity bullets… and there was an immediate pay-off, with a score bump to 1.93 million. Another day of practice and I hit 2.03 million – and with that Achievement unlocked, my Gamerscore completion percentage hit 96%.

The following weekend I accompanied my nephew to AVCon where, as luck would have it, they had a Gamecube running Ikaruga in an unofficial high-score competition. Once I got (re-)used to the wonderful Gamecube controller, I figured I knew the level well enough to get into the 1.5 million range… but, after about half-an-hour of play, I managed to snag a score just over 2.1 million – better than my own local highscore, a fact that is likely to play on my mind in the future. When I left AVCon that day, I was still the highest score by about 1.8 million points(!). 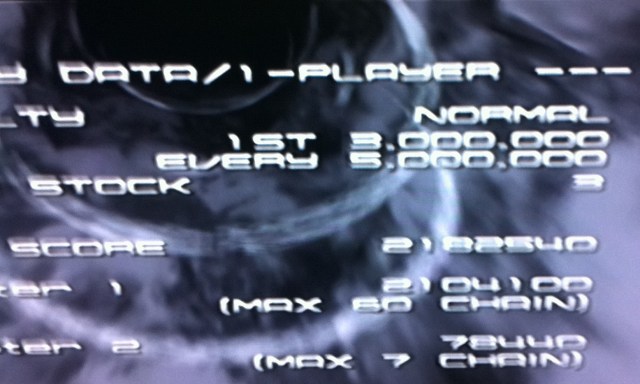 After moving furniture around to accommodate the camera, I managed to rope my ex into helping me out with Kinect Adventures… she was incredibly sceptical of the Kinect initially, but we were soon leaping around, sweating up a storm, pushing through for the co-op Achievements. She gracefully retired, and I spent another couple of nights flailing around to get the requisite platinum ranks… and knocking Kinect Adventures off The List.

Quite unexpectedly, I found myself playing Luxor 2 again, pushing through the Normal difficulty level and into Advanced. Things seemed to be pretty easy going early on, but I hit a tough patch around Stage 9: some levels were taking up to two hours to tip-toe through. Perseverance paid off, though, and I breezed through the final handful of stages in one grumpy after-work evening; a weekend of more troubling levels in the tricky Challenge of Horus netted the final skill-related Achievement. A few hours of whoring, and Luxor 2 was also off The List.

With that large project off my plate, I started looking for another to tackle… and, with the imminent re-release of Jet Set Radio, I decided to tackle the three Dreamcast variants of the game that I had squirrelled away (two of them still shrink-wrapped!). After discovering the extent of the game’s unlockables – and its annoying peccadilloes – through a play through of the PAL version, I threw away my progress and started from scratch, stepping through all three versions of the game in parallel. The differences with the Japanese version were most noticeable, of course, but even the US and PAL versions had their (inexplicable) differences… but by the time I finished all three games, I was well practised in the game.

So when the 360 version was released on September 19, I leapt into it with gusto. I surprised myself by Jetting most of the levels on my first attempt – muscle memory really pays off, I think! TrueAchievements had me pegged as the sixth person to “complete” the game (though I seem to have dropped to eighth now), and I would’ve been much higher on that list… had I not taken a little trip to Melbourne to see Tetsuya Mizuguchi speak. Oh – and to meet him. He watched me play Child of Eden, don’t-you-know. But there’ll be a (longer, painfully detailed) post about that later ;)

There’s other games that’ve been played – Child of Eden, Rez, Burnout Paradise, Mario Kart Wii – and most recently I’ve returned to Uncharted 2 (in an effort to wrap that up before year’s end, as resolved). I’m still champing at the bit for Dyad (which is caught up in Certification Hell), but there’s not really that much else that’s tickling my fancy at the moment. I’m just cleaning up older games at the moment – or, as I like to think of it, following through on prior commitments.

Oh – and the Wii U? I’ve only got one thing to say about that…