Another 360-bound week has passed – I seem to have completely forgotten about Jet Set Radio for the moment (apart from the obvious comment in passing) – but at least I haven’t bought anything new. The release of Suda51’s Flower, Sun, and Rain is pretty much a must-buy, and I might as well snaffle Soul Bubbles while I’m at it. More DS goodness that, unfortunately, is going to push The List dangerously close to 70 – SEVENTY! – unfinished games.

I used to think that completing – that’s PeteComplete, of course – one game a month was a pretty reasonable goal. After all, my normal “working” week permits a lazy twenty-odd hours of gaming, so that’s eighty hours a month – surely enough for most games, save longer RPGs. But then there’s games that actually require skill and skill (in my case) requires practise… so what am I to do? Even at a game a month, there’s nearly six years worth of gaming on The List!

Case in point: two of the games I played this week I’ve had since the Australian launch of the Xbox 360 (March 23, 2006). Geometry Wars still kicks my arse and, despite my commitment to improve my skills through regular practise late last year, has remained obstinate in giving me a fair go. That’s what I reckon, anyway. Likewise, my skill level in Robotron hasn’t got much better in two-and-a-half years, although I did manage to score a surprise Achievement whilst searching for Ranked matches during the week – the lag associated with my adversary’s host across the Pacific allowed me to jerk my way to Wave 11. Up popped the Achievement, surprising me so much I died thrice in quick succession. Yes, I’ll blame the Achievement Toast… yes ;)

Finally, though, Mercenaries 2 continues to delight with its co-op multiplayer goodness. My co-op buddy in Perth joined me to tackle the PMC challenges (which must be literally impossible in single player mode) and we managed to unlock all the additional costumes for all three characters… Mattias’ suit is a chuckle, and Jennifer’s catsuit is delicious, but nothing – and I mean nothing – can top the Chicken Suit. 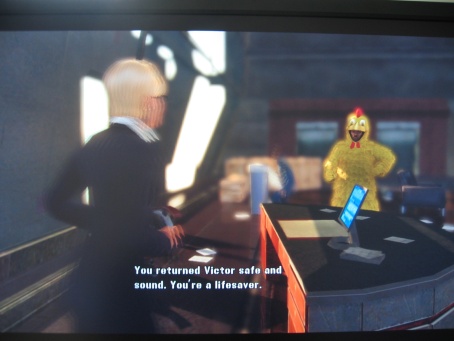 Two men, firmly ensconced in middle age, separated by thousands of kilometres, controlling characters running around Venezuela in chicken suits, raining heavy ordinance all over the country and punching army chaps in the head. Seriously, if this is as good as it gets, then I’m pretty bloody happy with the state of gaming :) 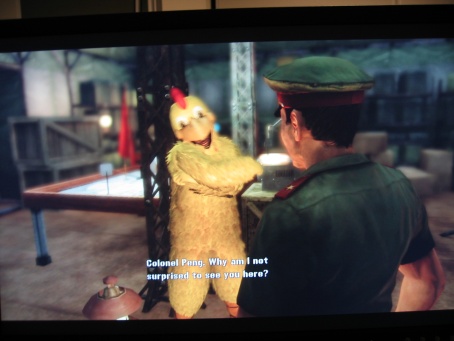 I don’t know who was more surprised, really.