After being blown away by the rather magnificent Killer7, I was keen to check out Suda51‘s next baby. Press buzz around No More Heroes was positively bubbling, with hopes being built that it would be the first massive third-party title for the Wii.

After acquiring the European version of the game (Australia seems destined to forever fall under the shadow of the delayed Euro releases), I decided to forgo my my zillion-playthrough Killer7 plans and leapt right into the game. And it’s really quite a jarring opening: the toonish cel-shading, combined with retro-Lego-inspired blocky models have you questioning the decade in which No More Heroes was written. But, having toddled your way from the front door of your motel room to the stairs, you’re treated to an opening credit sequence that more than tips its hat to Tarantino. Using such a film trailer-esque opening is a ballsy move, and probably the nicest use of FMV I can remember in recent games; and, with heart pumping and a goofy grin on my face, the game engine kicks in for the pre-tutorial sequence: with a guitar screeching in the background, Travis Touchdown incinerates two guards with his light sabr… erm, “beam katana” and punctuates the performance with a hearty “Fuckheads!”

This, clearly, is not Animal Crossing. And that sequence always crosses my mind when I hear someone talk about how the Wii “is just a kid’s machine”. 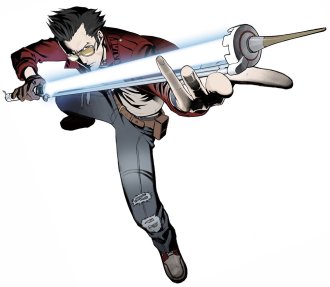 The tutorial is just brief enough to tell you that holding “Z” and mashing “A” is good, and occasionally a prompt will appear onscreen giving you a simple gesture to enact an über-move. And this works well on my initial playthrough on the easiest setting: hold Z, dodge with D-pad, mash A. Easy. Blasting through the first level, and it’s all very interesting – but you don’t actually feel like you’re doing anything – the button mashing is animating Travis very nicely, and there seems to be a fair bit of carnage going on by your blade. The first time you have to recharge your katana is a bit of a surprise, but hey – the rapid Wiimote wanking action is second nature. To me, at least.

Eventually you reach the first boss fight, after a chat on your Wiimote cellphone (make sure the speaker on the Wiimote is on, lest you’ll be as confused as I was!). These brief interludes with love-interest-come-boss Sylvia Christel on the phone – and in the pre- and post-mission cut-scenes – are a maelstrom of cheese, corn, and uneven writing; Travis goes from drooling puppy-dog to sneering dismissive with no real rhyme or reason. Sylvia is, of course, a bitch for a reason, but let’s face it – the storytelling isn’t NMH‘s strong suit.

Where the game comes into its own is in the boss battles.

Somewhere around the interweb I heard that No More Heroes shared a character designer with the (rather excellent) Speed Grapher anime, something which the IMDB page for NMH doesn’t verify. Despite the discrepancies, there’s certainly similarities between the two, with bold boss-characters that verge on the bizarrely risqué: from the crotch-laser-toting Destroyman, to the “fuck you, ya little prick” goading of Speed Buster, to the Uma Thurman-esque Bad Girl who provides panty-loving fan service. But the bosses are the only characters that receive any TLC whatsoever; all the other entities you encounter in the game are either completely nondescript low-polygon grunts (grinding katana-fodder for further progress) or hopelessly under-developed side characters (the mysterious – and buxom – Dr Naomi, and the proprietors of various shops). 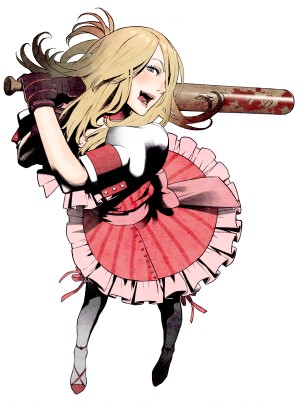 Outside those boss encounters, the “Punk’s Not Dead” ethic of Suda51’s Grasshopper Manufacture is stamped all over No More Heroes – the overworld of Santa Destroy is a jarring mish-mash of beautiful skylines and boxy cars. The washed-out colours and innocuous sounds of the environments give way to brash interstitials, all big guitar chords and bold colours splashed on white. The game exudes style at every turn – it’s just that it’s a different style every time. Go kill a squillion bad guys, raining ash/blood on the landscape, then spend ten minutes petting your cat. Gameplay and graphics from this millennium as you do battle, but back to the eighties for chunky retro status screens and jolly bleepy-boop high-score music. As I said, a mish-mash. Patchwork. Incoherent.

But you can’t help but think that the overworld is so clunky it could only possibly be a joke – a parody of sandbox games, perhaps? – but a joke isn’t necessarily the most fun thing to play. In fact, if there is any complaint that could be levelled at NMH, it’s that the early levels require a bit of grinding – odd jobs or samey assassination missions to fund access to later levels. Whilst this isn’t a massive inconvenience, it does remind you that your “sandbox” is, essentially, linear; you’re always striving to see that next big battle.

After 18 hours, I’d managed to mash my way through the Sweet (Easy) difficulty level. Another twenty or so hours had all my little OCD-driven side-missions wrapped up, and another playthrough on Sweet followed by Mild (Normal difficulty). There’s not much of a leap in difficulty there, and – while I was happy enough with the wacky ramblings of the characters and the gameplay in general – it was with a certain amount of weariness that I started (what I intended to be) my final playthrough on Bitter (Hard) difficulty.

Now, it’s true that NMH, at first, appears to be bland – a simplistic, but punkishly stylised, button-masher. But repeated playthroughs – in the fabulous Bitter mode – yield gameplay-changing rewards; rhythms of boss battles are exposed, generating the same kind of feeling that you get when suddenly hearing a buried instrument within a wall of music. The fights become intelligent, demanding cognition. Button-mashing serves no good whatsoever, and the game demands that you fight. And I want to fight these bosses – I see this challenge as something to be savoured, rather than persevered.

I’ve never, ever, felt this way about Boss Fights before.

I love this game. I love the way it has opened my eyes a little wider to the possibilities of gaming; I love that it recognises its place sitting at the edge of the mainstream gaming market, tongue planted firmly in cheek. I love the swaggering cocksureness it exudes, utterly confident in the knowledge of its weakpoints, its failings. I love the backhanded, last-minute throwback to Killer7; I love the competent Great White Giant Glastonbury shooter you find wodged in the middle of the game. I love the fact that Travis Touchdown’s defining monologue is delivered in the midst of the first boss battle, muddied and drowned by the action around it; I love that the brain-twisting monologue near game’s end is delivered in fast-forward, acknowledging the fact that this is, in fact, a game.

Yes, I had to learn to love it, and that’s not something a lot of people will actually bother to do; but I feel now it’s my job to tell others about this wonderful, wonderful experience. Push through that first playthrough, ignore the clunkfest of an overworld; drink in the wonderful Masafumi Takada soundtrack and unlock Bitter Mode. Please. 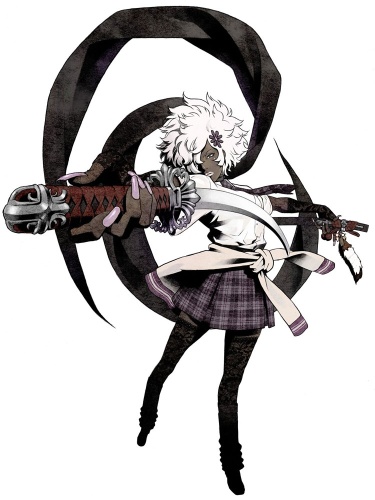 Shinobu – This girl delivered the Game Of The Year.

In the end, No More Heroes‘ failings are more tragic than erroneous: it’s a shame that few will push past the conflicted presentation, and a tragedy that fewer still will experience Bitter Mode. Regardless, No More Heroes is my Game Of The Year because it’s actually changed the way I think about gaming. That statement may sound lofty and pretentious, but it carries a lot of weight – because it’s true. Bitter convinced me that boss battles could indeed be glorious, rather than a massive pain in the arse; terrific, rather than just tolerable. I will rate my Bitter battles with Shinobu as my (single-player) highlight of the year – utterly, utterly fantastic fights: thrust, counter-thrust, heady attack, frantic defence, each bout whittling us both to within pixels of death. My losses left me feeling drawn, yet desperately eager for more; my breakthrough win felt fucking amazing.

And that feeling alone is Game Of The Year material for me.

2 thoughts on “No More Heroes”