So – it’s been a fortnight since I last wrote (due in no small part with a little distraction called “four years of tax returns”), and in that time it’s been bedlam in the gaming world… or, as it’s more popularly known, E3. And whilst a large number of the “big” announcements had been leaked beforehand (the PSP Go, Team Ico’s The Last Guardian footage), there were still a couple of surprises: New Super Mario Brothers Wii looks fantastic, and Super Mario Galaxy 2 arrived without any prior fanfare to offer more of the same – which is most definitely a good thing. Just Cause 2 got a lot of positive press, Brütal Legend earned some new fans (and an idiotic lawsuit from Activision), and Halo: Reach was announced.

And then there was this girl: 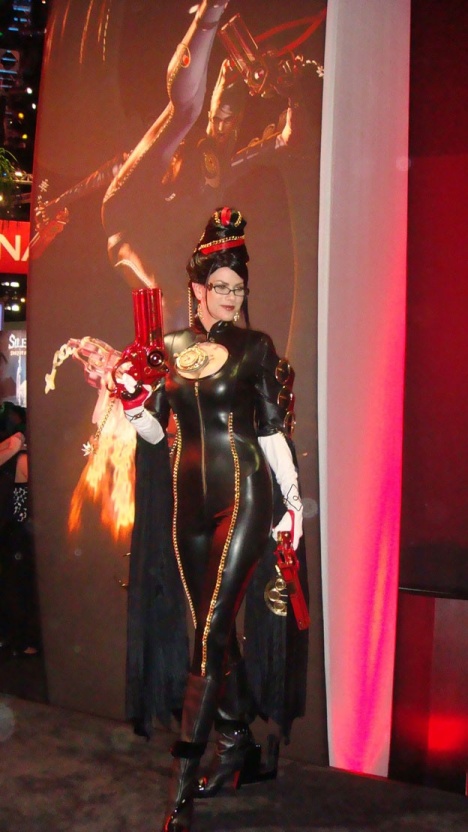 I don’t want to appear as if I get sucked in by any game featuring curvy vixens, wrapped in a thin veneer of “she’s just a strong female character, honest” justification for ludicrous over-the-top overt sexuality. No, it takes a bit more to have me drooling… and Bayonetta‘s batshit-insane antics have me sold. The gameplay looks to be the type of Japanese insanity that will leave it on The List forever, but I can’t not buy it; visuals are amazing, the character designs wonderfully bizarre, and the whole aesthetic just makes me well up with gamelust.

The arse, tits, and specs sure help, too.

Seeing Halo 3: ODST in various presentations encouraged me to round up a group of friends to go Achievement hunting in Halo 3. Ten “players” (four of them, strangely enough, on my 360) in a little social group yielded us the perfect opportunity to grab a wad of the Mythic Achievements… and a two week EXP-ban from Bungie. Oh well.

But the big (bigbigbig) news was the release of Burnout Paradise‘s Big Surf Island. Now, I don’t mind admitting I was like a little schoolgirl just prior to its release: giggling to myself in anticipation, hitting F5 to reload the Marketplace page online every couple of seconds and, whilst it was loading, refreshing the 360 Marketplace tab. It finally appeared, and my release vigilance rewarded me with a speedy download… and then I was there. On The Island.

And it was wonderful.

Big Surf Island reminded me of everything that was glorious about Paradise: the big jumps, the endless distractions, the beautiful handling. Some UK friends eventually came online, joined in, and we must have burned that Island for six or seven hours that night… and the next night, I went back for more, even with all the Achievements, events, smash gates, and billboards wrapped up. I’ve belted through the Island Challenges at least seven times now; I find myself driving to the next location before the current Challenge is finished.

Casting my eyes over the Island Stats, I noticed that I’d pretty much OCDed the add-on… except for one thing. “Vehicles: 8/9”. A bit of research revealed that final car is unlocked when the game is Complete… which, in Criterion’s thankfully symbiotic manner of speech, matched my definition. Everything done, 500/500 Challenges.

They were all Bike Challenges, too; four- to seven-players. Figuring there may be four-to-seven other people out there thinking like I do, I ducked into Bike mode and created an Open Freeburn session in Paradise. And waited.

For the first hour or so, not much happened; people would appear, and I’d have enough time to mouth their words for them – “this isn’t the Island! and what’s this motorbike?” – before they disappeared. By the end of the second hour, though, I seemed to have a party of four who were actually desperate for Challenges. Shy as we all were, there were no headsets in use, which made for some pretty cool bits of silent co-operation and camaraderie. Hours three and four saw numbers drift around a core group of six, until suddenly I realised that I had one Challenge left…

A six player Challenge. And I had a party of eight.

I figured that this was my time to be an Xbox LIVE prick. I selected the two mouthy newcomers (one of which seemed to have a vocabulary that consisted solely of “fuck”, “bitch”, and “nigger”) and kicked them out of the game, then quickly started that Final Challenge. It was a doddle, and there was a palpable sense of relief when I saw “500/500” pop onto the screen. I opened the party back up, and started taking requests off other players until I could take the mouthy randoms no more. I killed the session, scooted back into Island Car mode, and looked at my new – and final – acquisition: the Diamond P12. I painted it a soothing pink.

And then I realised: Burnout Paradise is off The List.

And I felt very, very pleased with myself :)

Later, I fired up Bionic Commando: Rearmed for the first time. I’d tried the demo after its appearance during last year’s Summer of Arcade, and had put it on the To Buy list; the recent price-drop (to 400 MS Points) made it a steal, regardless of the apparent difficulty of the Achievements. And, two levels in on Easy, I was getting increasingly frustrated; the controls felt alien and obstructive.

But suddenly, something in my head clicked – and the bionic arm became second nature. I breezed through the rest of the game… but I was very aware (by the presence of awkward white blocks) that Easy was… well, deliberately easy. The final level looks nigh-on impossible without the safety of the white blocks; I’m not looking forward to Super Hard difficulty at all.

It’s a lovely game, though: it exudes polish, and it a visual delight. The vector cannon upgrade is positively delicious, and there’s a neat aural and visual surprise in the last level that had me grinning like a Cheshire cat.

And some lustful thoughts involving Bayonetta.